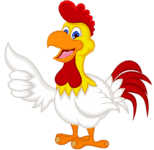 The stud rooster at a poultry farm is getting old, so the farmer buys a new one.

Once he’s arrived, the new rooster walks up to the old one and says, “Listen here, Gramps! This whole farm is mine now!”

The old rooster says, “C’mon buddy? At least let me stick around with the old hens? We’ll stay in the back?”

The new rooster is adamant “No way! All the hens are mine!”.

The old rooster sighs, and offers a proposition: that the two of them race around the farmhouse and if the old rooster wins he can stay on the farm, if he loses then he’ll leave and let the new rooster take over.

The only catch is that since the old rooster isn’t in very good shape, he needs a head start.

So the roosters line up, the old one has his head start, and the new rooster takes off.

As he comes round the front of the house, the old rooster is just in front of him.  He is so close to beating him.  He stretches out his neck and leaps forward, desperate to close the gap between them.

That’s when the farmer looks up from the front porch and sees the two roosters; he takes out his gun, shoots the new rooster in the head, and says,