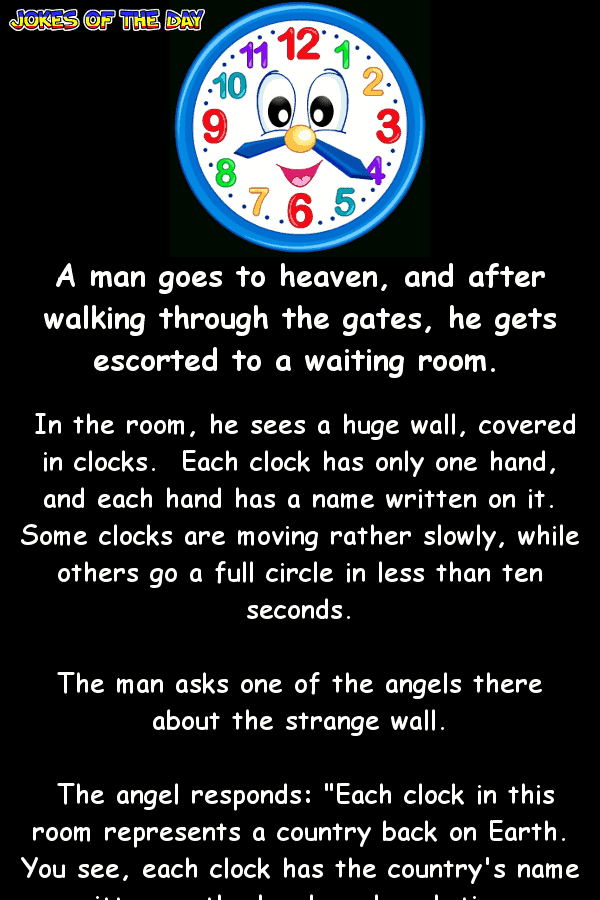 A man goes to heaven, and after walking through the gates, he gets escorted to a waiting room.

In the room, he sees a huge wall, covered in clocks.  Each clock has only one hand, and each hand has a name written on it. Some clocks are moving rather slowly, while others go a full circle in less than ten seconds.

The man asks one of the angels there about the strange wall.

The angel responds: “Each clock in this room represents a country back on Earth. You see, each clock has the country’s name written on the hand, and each time a person from that country commits a sinful act, the hand on said clock goes forward a bit. The bigger the country the bigger the clock.”

Intrigued by this, the man seeks out the clock of his own country, Canada. And what do you know, there it is, going forward one step at a time. He looks at all the other clocks, like Russia, the biggest of them all. Right next to Russia is tiny Estonia, and next to that Finland, Sweden and Norway, all going steadily forward, almost simultaneously.

But one clock is missing. The man asks the angel, “Where is the American clock? I thought it would be pretty big, but I can’t see it anywhere.”

The angel responds: “Ah yes, that one. An arrangement was made to have that one transferred to hell.”

To which the angel responds: “It spins so fast, it’s being used as the ceiling fan in the smoking room.”