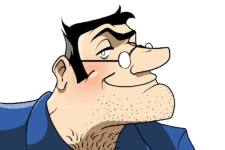 After a night out at the pub with his buddies, Ralph came home rather drunk.

He slid into bed, kissed his wife on the cheek and fell into a deep sleep.

He awoke before the Pearly Gates.

St. Peter said, “You died in your sleep, Ralph.”

St. Peter said, “Hmm, perhaps that could be arranged.  It does involves a lot of paperwork… but sure.  You’ve got two alternatives: you can come back as a fish or as a hen.”

Ralph never liked swimming, and thought that perhaps being a hen wouldn’t be that bad after all.  Walking around pecking at the ground, no stress, and if the local rooster was nice then perhaps it could be a comfortable existence.

Ralph replied, “Okay, then I choose to be a hen.”

The next thing he knew, he was covered with feathers, clucking, and pecking the ground.

A rooster strolled past.  “So, you’re the new hen, eh? How’s your first day here?”

“Not bad,” replied Ralph the hen, “but I have this strange feeling inside.  Like I’m gonna explode!”

Ralph clucked twice and pushed, and voila, out popped an egg!

Ralph was overcome with emotion as he experienced motherhood for the first time.  He then clucked twice, pushed, and out came another egg.  His joy was overwhelming.

As he was about to lay his third egg, he felt a smack on the back of his head, and heard his wife shout, “Dammit, Ralph! Wake up.  You’re shitting the bed!!!”