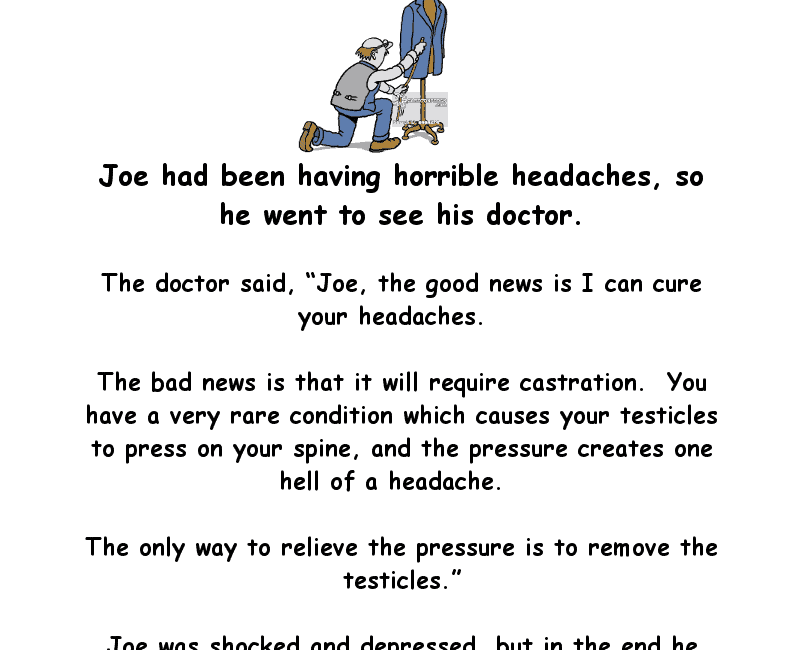 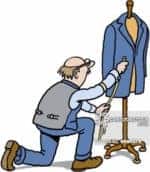 Joe had been having horrible headaches, so he went to see his doctor.

The doctor said, “Joe, the good news is I can cure your headaches.  The bad news is that it will require castration.  You have a very rare condition which causes your testicles to press on your spine, and the pressure creates one hell of a headache.  The only way to relieve the pressure is to remove the testicles.”

Joe was shocked and depressed, but in the end he came to the conclusion that he had no choice but to go under the knife. When he left the hospital, he was without a headache for the first time in 20 years, but he felt like he was missing an important part of himself.

As he walked down the street, he realized that he felt like a different person.  He could make a new beginning and live a new life.  Then he saw a men’s clothing store and thought, “That’s what I need. A new suit.”

He entered the shop and told the salesman, “I’d like a new suit.”

Joe laughed, “That’s right, how did you know?”

“Been in the business 60 years!” the tailor said.

Joe tried on the suit, and it fit perfectly.

As Joe admired himself in the mirror, the salesman asked, “How about a new shirt?”

Joe thought for a moment and then said, “Sure.”

Joe was surprised, “That’s right, how did you know?”

Joe tried on the shirt and it fit perfectly.

He walked comfortably around the shop and the salesman asked, “How about some new underwear?”

Joe thought for a moment and said, “Sure.”

But the salesman shook his head, “You can’t wear a size 34.  A size 34 would press your testicles up against the base of your spine and give you one hell of a headache.”