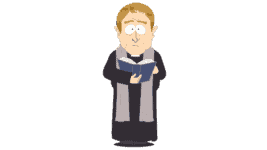 A poor priest was having trouble managing his church.

The income was pitiful, the plumbing rattled, the roof leaked, the air conditioning didn’t work, and the church didn’t have the funds for any repairs.

Then, the priest got a brilliant idea.

He bought a book about hypnosis, and read it from cover to cover.  At the next service, he took out a cross on a chain, swung it back and forth, and lulled the congregation into a hypnotic trance.

He said, “I want everybody to walk down the aisle and put $20 in the plate.”

They did, and he had the church’s roof fixed that week.

This worked so well that on the next Sunday, he decided to do it again.

Taking his cross out, he proclaimed, “I want everybody to come down the aisle and drop $100 in the offering plate.”

They did, and he got the air conditioning fixed and the parking lot redone.

His third Sunday, he got to thinking, “I haven’t been paid in a long time. I deserve a little money.”

The crowd was hypnotized, but he got so excited about what he wanted to receive that his hands started to sweat, and as the chain slipped from his grip and hit the floor, he yelled:

It took him two weeks to air out the church.