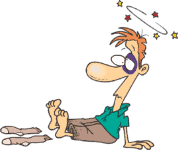 A guy is walking down the street and he sees his friend with a black eye.

He asks him what happened.

His friends says, “Well I was in church and…”

The man interrupts “Church! How do you get hurt in church?”

The friend continues, “Well, I was sitting behind this woman Angelina, and after a while, what with all the standing, sitting and kneeling, I noticed she had developed a wedgie.  Now me being a nice guy, I pulled it out for her.  She turned around “WHACK””

The man says, “I cant believe you did that”, and continues walking.

A week later he sees his friend again and he has another black eye.  He asks him what happened this time and his friend responds, “Well I was in church again…”

The man interrupts, “CHURCH AGAIN? How do you keep getting hurt in church?!”

The friend explains, “Well, I was sitting behind Angelina again and…”

“Don’t tell me you did it again”

“I did not, after all of the standing, sitting, and kneeling, I noticed the wedgie again…”

“If you pulled it out again…”

“I did not pull it out.  This time her husband was with her and he pulled it out for her.

Now, I know she doesn’t like that, so I pushed it back in.”