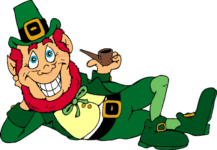 … so she sent him out to Sean’s market to buy escargot and told him not to stop by the pub on the way home.

Well, Paddy being Paddy, he decided to pop in for a quick pint anyways.

After a few hours, and several more “quick” pints, Paddy decided to leave and head home.

He staggered toward the house, knowing he would surely get an earful.  As he opened the gate the porch light came on and he heard the door begin to open.

Thinking fast, he emptied the bag of escargot on the ground and said in a loud voice,