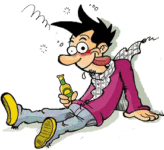 A man goes into his favorite bar and sees a jar of money on the counter with the word “win” printed on it.

“What’s this about?” he asks the bartender.

“That’s our monthly contest. You put in a $20 entry fee and then perform the three acts. If you complete all three successfully you win the pot.”

“Well, first, you have to sucker-punch the bouncer,” says the bartender, pointing to a man by the door who is the size of a house. “Then if you’re still okay, we have a pit bull downstairs with an abscessed tooth. You have to pull it out with your bare hands.”

“See old Mrs. Jennings down there?” asks the bartender, pointing to an old lady at the end of the bar with warts on her face. “She hasn’t had sex in a long time.”

As the night goes on, one drink becomes many, and the guy decides he’s feeling pretty brave. “Aw, what the heck,” he thinks, and plops a $20 in the jar and heads over to the bouncer, punching him in the jaw as hard as he can.

The bouncer crumples to the floor as if made of paper. “All right!” he yells. “Where’s that pit bull?!”

He runs downstairs and throughout the bar a howling is heard as if the gates of Hell have opened up, then silence.  A few moments later, he comes running back up the stairs, a wild look in his eye.

“All right!” he says. “Where’s the lady with the abscessed tooth!?”

Back to Top
Close

Send this to a friend