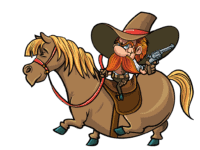 A cowboy appeared before St. Peter at the Pearly Gates.

“Have you ever done anything of particular merit?” St. Peter asked.

“Well, I can think of one thing,” the cowboy offered.

“On a trip to the Big Horn Mountains out in Wyoming, I came upon a gang of bikers who were threatening a young woman. I directed them to leave her alone, but they wouldn’t listen.”

“So, I approached the largest and most tattooed biker and smacked him in the face, kicked his bike over, ripped out his nose ring, and threw it on the ground.”

Saint Peter was impressed, “When did this happen?”

“A couple of minutes ago.”