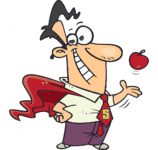 A guy walks into a bar and orders a rum and coke, but the bartender hands him an apple.

“What the hell is this? I ordered a rum and coke,” the guy protests.

“Just take a bite of the apple,” says the bartender. So, the guy bites the apple, and his eyes light up.

“Hey this apple tastes just like rum! What did you soak it in it?”

The bartender tells him, “Turn it around.”

So the guy does, takes another bite, and is suddenly quite pleased.

Another man approaches the bar, and asks the bartender for a gin and tonic.

The bartender hands him an apple.

Confused, the man begins to question the validity of the bartender, when the first guy reassures him, “Buddy, try the apple,” and with a nod of his own, takes another bite.

The second man follows suit, and looks back at the bartender in exclamation, “Tonic! What’s this, a tonic apple?”

The bartender swirls his finger in the air and tells the man, “Turn it around…”

The man has a bite from the other side of the apple and is exuberant. “It’s gin! It’s really gin! A gin and tonic apple!”

The two men revelled in this discovery for a while, when a dwarf walked up to the bar, made his way onto a stool beside the men, and beckoned for the bartender.

As he’s about to order, the second man interrupts him, “Oh, hey man wait! You should order an apple! You can get an apple that tastes like anything you want here! I’ve got a gin and tonic apple, and this guy’s got a rum and coke apple!”

The dwarf casts an incredulous look at the bartender, who plainly nods back in confirmation.

“Oh yeah?” He starts, “OK then, it’s been a while, gimme the sweet taste of a woman flavored apple!”

And the bartender hands him an apple.

The dwarf takes a big, expectant bite from the apple, and immediately spits it out all over the bar.

“Ughyuuk!!” He cries out, “This apple tastes like shit!”

The bartender swirls his finger in the air and tells him,…