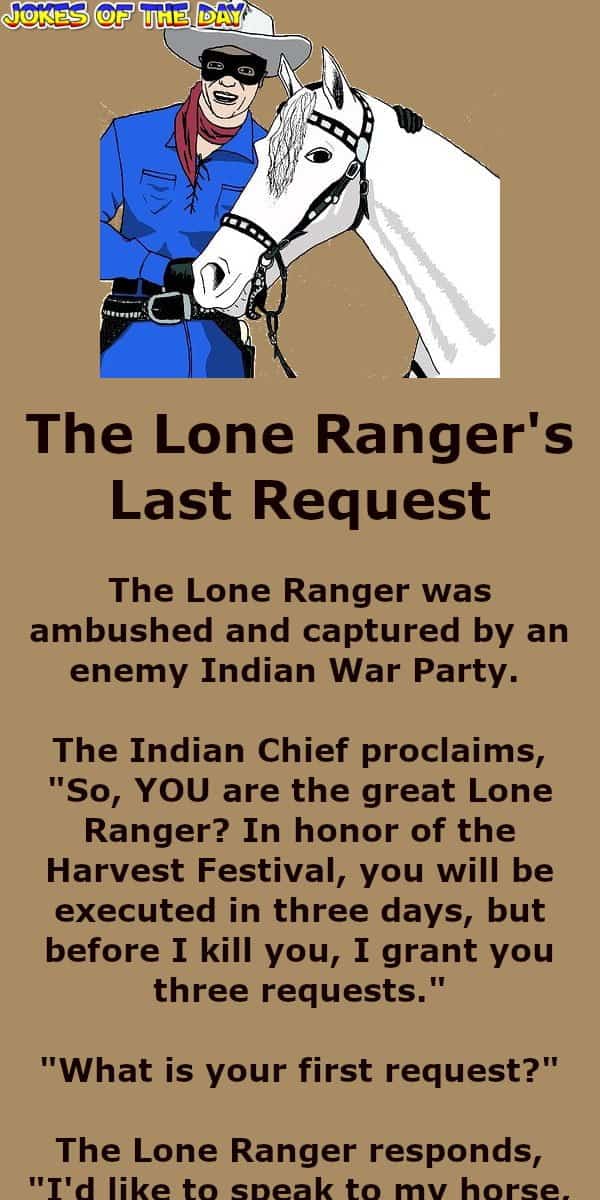 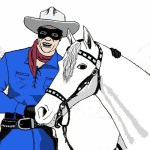 The Lone Ranger was ambushed and captured by an enemy Indian War Party.

The Indian Chief proclaims, “So, YOU are the great Lone Ranger? In honor of the Harvest Festival, you will be executed in three days, but before I kill you, I grant you three requests. What is your first request?”

The Lone Ranger responds, “I’d like to speak to my horse, Silver.”

Silver is brought before the Lone Ranger who whispers in Silver’s ear, and the horse gallops away.

Later that evening, Silver returns with a beautiful blonde woman on his back.

As the Indian Chief watches, the blonde enters the Lone Ranger’s tent and spends the night.

The next morning the Indian Chief admits he’s impressed. “You have a very fine and loyal horse, but I will still kill you in two days. What is your second request?”

The Lone Ranger again asks to speak to his horse.

Silver is brought to him, and he again whispers in the horse’s ear.

As before, Silver takes off and disappears over the horizon.

Later that evening, to the Chief’s surprise, Silver again returns, this time with a voluptuous brunette, more attractive than the blonde.

She enters the Lone Rangers tent and spends the night.

The following morning the Indian Chief is again impressed. “You are indeed a man of many talents, but I will still kill you tomorrow. What is your last request?”

The Lone Ranger responds, I’d like to speak to my horse, alone.

The Chief is curious, but he agrees.

Silver is brought to the Lone Ranger’s tent.

Once they’re alone, the Lone Ranger grabs Silver by both ears, looks him square in the eye and says, “Listen, very carefully! FOR THE LAST TIME, I SAID,…”