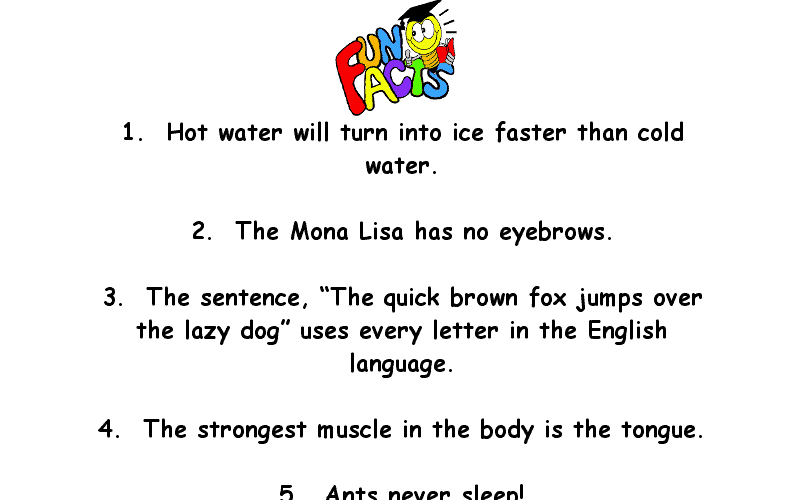 Did You Know Any Of These 48 Facts? 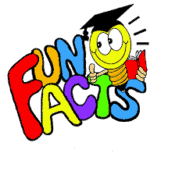 1.  Hot water will turn into ice faster than cold water.

2.  The Mona Lisa has no eyebrows.

3.  The sentence, “The quick brown fox jumps over the lazy dog” uses every letter in the English language.

4.  The strongest muscle in the body is the tongue.

6.  “I Am” is the shortest complete sentence in the English language.

9.  When the moon is directly overhead, you will weigh slightly less.

10.  Camels have three eyelids to protect themselves from the blowing desert sand.

11.  There are only two words in the English language that have all five vowels in order: “abstemious” and “facetious.”

12.  The name of all the continents end with the same letter that they start with.

13.  There are two credit cards for every person in the United States.

14.  TYPEWRITER is the longest word that can be made using the letters only on one row of the keyboard.

16.  Chocolate can kill dogs, as it contains theobromine, which affects their heart and nervous system.

17.  Women blink nearly twice as much as men!

18.  You can’t kill yourself by holding your breath.

19.  It is impossible to lick your elbow.

20.  The Guinness Book of Records holds the record for being the book most often stolen from Public Libraries.

22.  It is physically impossible for pigs to look up into the sky

23.  The “sixth sick sheikh’s sixth sheeps’ sick” is said to be the toughest tongue twister in the English language.

24.  “Rhythm” is the longest English word without a vowel.

25.  If you sneeze too hard, you can fracture a rib. If you try to suppress a sneeze, you can rupture a blood vessel in your head or neck and die.

26.  Each king in a deck of playing cards represents great king from history.

27.  It is impossible to touch you nose with your tongue.

30.  What do bullet proof vests, fire escapes, windshield wipers and laser printers all have in common?

Answer. – All invented by women.

31.  Question – This is the only food that doesn’t spoil. What is this?

32.  A crocodile cannot stick its tongue out.

34.  All polar bears are left handed.

36.  Butterflies taste with their feet.

37.  Elephants are the only animals that can’t jump.

39.  On average, people fear spiders more than they do death.

40.  Stewardesses is the longest word typed with only the left hand.

41.  The ant always falls over on its right side when intoxicated.

42.  The electric chair was invented by a dentist.

43.  The human heart creates enough pressure when it pumps out to the body to squirt blood 30 feet.

44.  Rats multiply so quickly that in 18 months, two rats could have over million descendants.

45.  Wearing headphones for just an hour will increase the bacteria in your ear by 700 times

46.  The cigarette lighter was invented before the match.