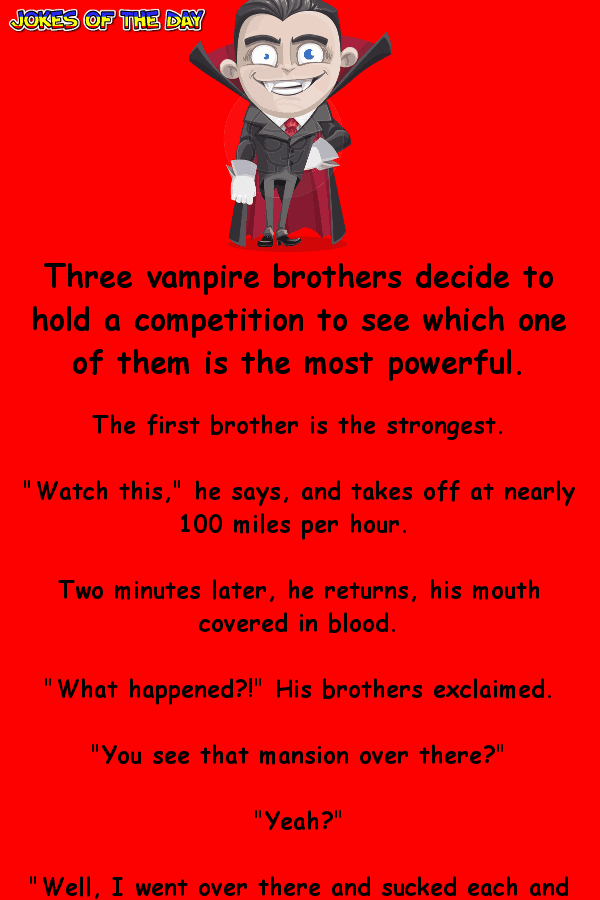 Three vampire brothers decide to hold a competition to see which one of them is the most powerful.

The first brother is the strongest.

“Watch this,” he says, and takes off at nearly 100 miles per hour. Two minutes later, he returns, his mouth covered in blood.

“You see that mansion over there?”

“Well, I went over there and sucked each and every last family member dry. They are all dead.”

“Wow!” his brothers say, “As expected, for you are the strongest.”

The second brother to go is the oldest.

“Watch and learn, boys.” He says, and takes off even quicker, at 150 miles per hour.

Five minutes later, he returns, both his mouth and his neck covered in blood.

“You see that village over there?”

“Well I went over there and killed every last person in the entire village. There is not one left alive.”

“Wow!” His brothers say in awe. “As expected, for you are the oldest and have the most experience.”

The third brother is the fastest. “Watch this, and don’t blink or you might miss it.”

He flies off, faster than the rest of them, going at least 200mph.

In only ten seconds, he returns. His entire mouth, nose, and neck covered in so much blood, it stains the front of his shirt.

“You see that giant tree over there?”