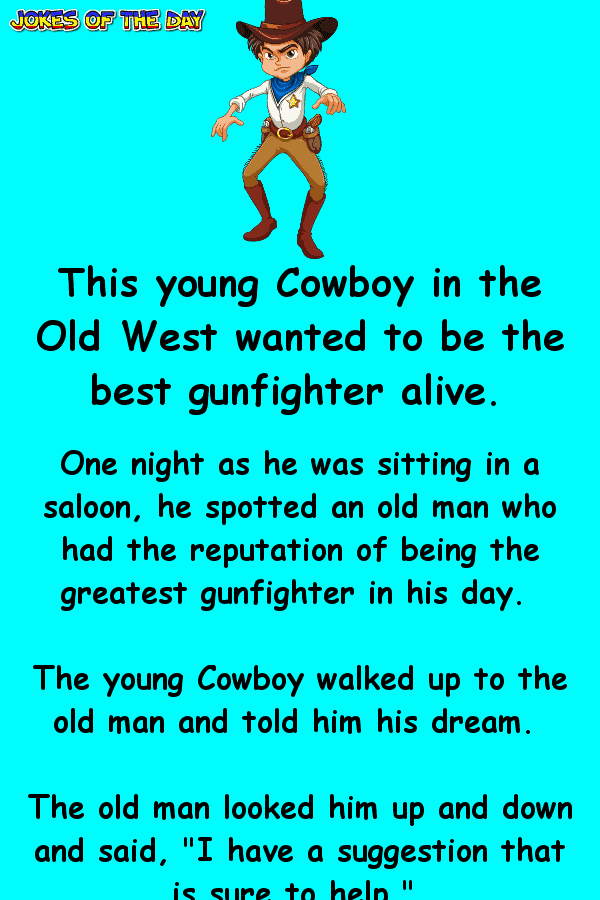 This young Cowboy in the Old West wanted to be the best gunfighter alive.

One night as he was sitting in a saloon, he spotted an old man who had the reputation of being the greatest gunfighter in his day.

The young Cowboy walked up to the old man and told him his dream.

The old man looked him up and down and said, “I have a suggestion that is sure to help.”

“Tell me, tell me,” said the young Cowboy.

“Tie the bottom of your holster lower onto your leg.”

The young Cowboy did what he was told and drew his gun and shot the bow tie off the piano player.

“Wow, that really helped.  Do you have any more suggestions?”

“Yeah, if you cut a notch in the top of your holster where the hammer hits, the gun will come out smoother.”

The young Cowboy did what he was told and drew his gun and shot a cufflink off the piano player.

“This is really helping me.  Is there anything else you can share with me?”

“One more thing,” said the old man.  “Get that can of axle grease over there in the corner and rub it all over your gun.”

The young Cowboy didn’t hesitate but started putting the grease on the barrel of his gun.

“No, the whole gun, handle and everything,” said the old man.

“No,” said the old man, “But when Wyatt Earp gets done playing that piano he’s going to shove that gun up your ass, and it won’t hurt as much!”