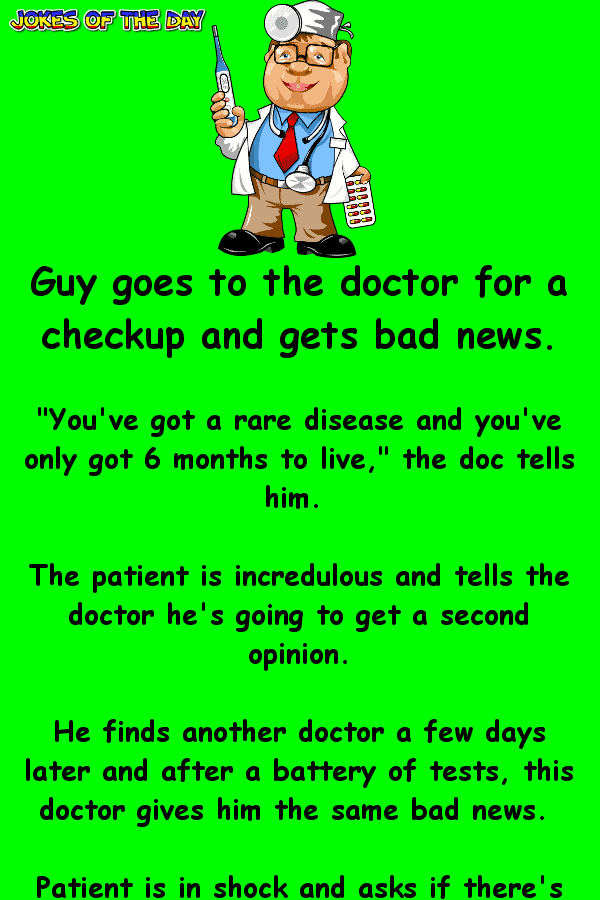 Guy goes to the doctor for a checkup and gets bad news.

“You’ve got a rare disease and you’ve only got 6 months to live,” the doc tells him.

The patient is incredulous and tells the doctor he’s going to get a second opinion.

He finds another doctor a few days later and after a battery of tests, this doctor gives him the same bad news.

Patient is in shock and asks if there’s anything he should do.

The doctor pauses a moment and says, “Can I give you some non-medical advice?”

“Sure, anything, Doc. I’m desperate!”

“Do you have a girlfriend?” the doctor asks.

“Nope, been single for years,” says the patient.

“Well,” says the doctor, “I encourage you to find a girlfriend.  Go shopping with her, listen to all of her complaints and problems, get involved with every thing she does and completely immerse yourself into her. I mean, EVERY aspect of her you can.”

The patient perks up and is feeling hopeful. “Will that extend my life?!”

“No,” says the doctor, “But it’ll be the longest darn 6 months you’ve ever had.”