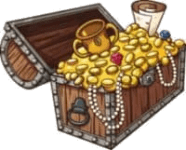 Three young friends, seeking a fortune, adventure together to Egypt where a new pyramid has been discovered.

Upon arriving at the pyramid, they are immediately told to leave as the site has already been excavated. The friends, not willing to concede, look for a different way in and find an entrance never before used.

It is through this entrance that they find a secret passage way, one that is made at first to look like a dead end but is truly a turn in the hallway.  They venture around this turn and into a great room.

In this room are torches.  A sign just inside the room warns “He who lights this shall burn to death.” (In Egyptian hieroglyphs of course) The first friend takes a torch, and lights the end.  The Friends venture through the room to another.

In this second room is a small lake, with a small canoe able to seat three.  In the canoe is a paddle that reads, “He who uses this shall die a watery death.”  The second friend takes this paddle and uses it to guide the three of them to the other side of the lake and through a third and final door.

In this last room is a great atrium, filled with heaps upon heaps of golden artefacts and jewels. The three friends rush in, and come to a golden sarcophagus.  The third friend looks at it, and sees that it has the warning “The first man to touch this treasure shall die a most terrible death” written on its exterior.  The third friend, giving the message no care, proceeds to pick up as much gold as he can. His friends quickly follow suit.

Many months later, after the friends had returned home with their loot and used it to live lucrative lives, the third friend received troubling news.  The first friend had been sleeping when his mansion had caught fire and burned to the ground, killing him. Remembering the warning, he calls the second friend, but they both laugh it off.

A month later, the third friend is watching the news when a breaking story comes on. It is his second friend, who had been out on his yacht. The boat had inexplicably capsized, killing him.  The third friend saw this and grew terribly fearful.

Assuming he had a month left before whatever horror would befall him, the third friend sold many of his belongings to afford the most secure underground bunker.  He then used his remaining fortune to buy an incredibly high tech security system, cameras all over, and 30+ armed guards stationed at the entrance.

The third friend spent a month in the bunker.

30 days passed, and night was falling when the third friend look to the security cameras. Outside of the bunker, at the entrance, was an empty expanse of land, save one object. All the security guards were mysteriously gone, and just in frame was the silhouette of a sarcophagus. The third friend panicked.

Rushing to the door, he pushed all manners of furniture before it.  A fridge, a bookshelf, his bed, a desk.  But once he had placed the final barricade, a great pounding game to the door.  Looking to security footage, the sarcophagus had begun to float, and was using itself as a battering ram. To the third friends horror, the door began to crack.

With a tremendous boom, the door and all the furniture was blasted away.  The third friend screamed, as there in the doorway floated the sarcophagus.  He ran through the bunker, stalked by the sarcophagus.  The friend jumped into the bathroom and locked the door behind him.  There, he sat on the toilet and cried.

The sarcophagus fell to the ground and turned to dust.

The man marvelled at this.  Looking for the last thing he had thrown, he picked it up and thought,

“All I had to do was take some NyQuil and the coffin would stop.”