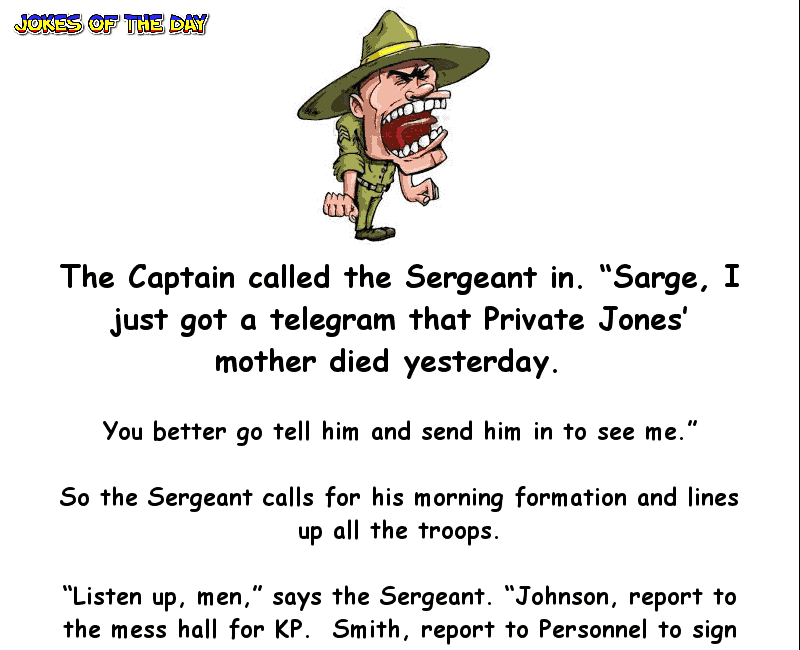 It can be hard being diplomatic all the time.  It’s a skill like any other – a skill that some people lack.

This is one such story.

The Captain called the Sergeant in. “Sarge, I just got a telegram that Private Jones’ mother died yesterday.  You better go tell him and send him in to see me.”

So the Sergeant calls for his morning formation and lines up all the troops.

“Listen up, men,” says the Sergeant. “Johnson, report to the mess hall for KP.  Smith, report to Personnel to sign some papers.  The rest of you men report to the motor pool for maintenance.

Oh by the way, Jones, your mother died, report to the commander.”

Later that day the Captain called the Sergeant into his office.

“Hey, Sarge, that was a pretty cold way to inform Jones his mother died.  Couldn’t you be a bit more tactful, next time?”

A few months later, the Captain called the Sergeant in again and says, “Sarge, I just got a telegram that Private McGrath’s mother died.  You’d better go tell him and send him in to see me.  This time be more tactful.”

So the Sergeant calls for his morning formation.

“OK men, fall in and listen up.

Everybody with a mother, take two steps forward.

NOT SO FAST, McGrath!”