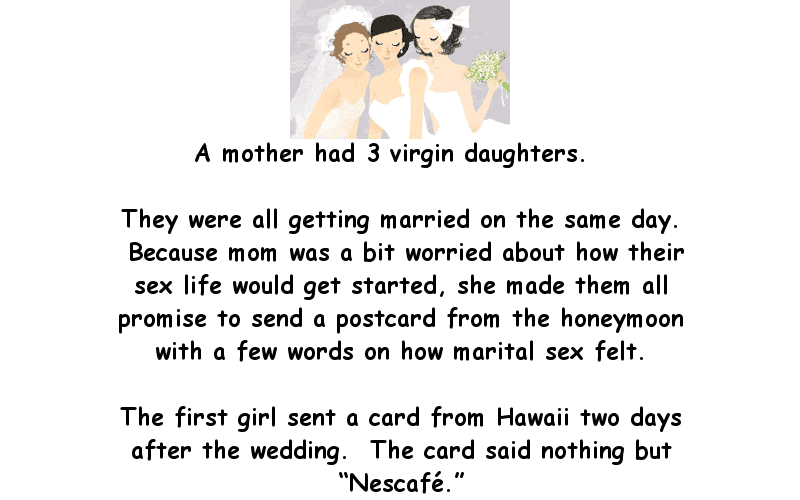 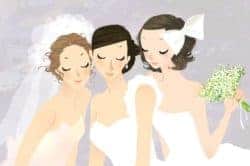 A mother had 3 virgin daughters.  They were all getting married on the same day.  Because mom was a bit worried about how their sex life would get started, she made them all promise to send a postcard from the honeymoon with a few words on how marital sex felt.

The first girl sent a card from Hawaii two days after the wedding.  The card said nothing but “Nescafé.”

Mom was puzzled at first, but then went to the kitchen and got out the Nescafé jar.  It said: “Good to the last drop.” Mom blushed, but was pleased for her daughter.

The second girl sent the card from Vermont a week after the wedding, and the card read: “Pall Mall”.

Mom now knew to go straight to her husband’s cigarettes, and she read from the Pall Mall pack: “Extra Long King Size.”  She was again slightly embarrassed, but still happy for her daughter.

The third girl left for her honeymoon in the Caribbean.  Mom waited for a week, nothing.  Another week went by and still nothing.

Then after a whole month, a card finally arrived.  Written on it with shaky handwriting were the words: “British Airways”.

Mom took out her latest Harper’s Bazaar magazine, flipped through the pages, fearing the worst, and finally found the ad for the airline.

The ad said: “Three times a day, seven days a week, both ways.”