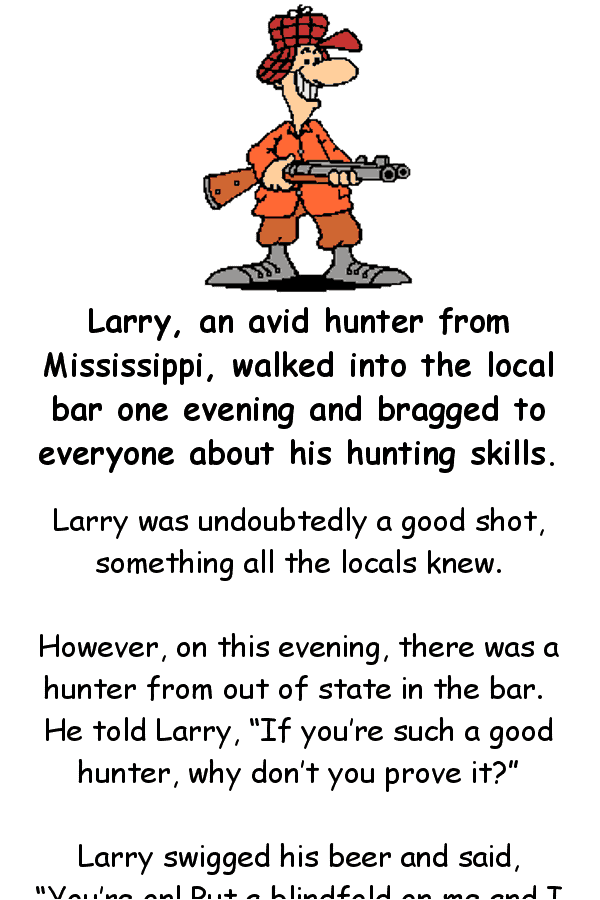 Larry, an avid hunter from Mississippi, walked into the local bar one evening and bragged to everyone about his hunting skills.

Larry was undoubtedly a good shot, something all the locals knew.

However, on this evening, there was a hunter from out of state in the bar.  He told Larry, “If you’re such a good hunter, why don’t you prove it?”

Larry swigged his beer and said, “You’re on! Put a blindfold on me and I will still be able to recognize any animal’s skin and tell you how it was killed.  For every animal I get right, you buy me another beer.  Deal?”

The other hunter thought that there was no way Larry could pull this off, so he agreed to the bet.  A small crowd was gathering around them, all excited to see how this would turn out.

The bartender put a blindfold on Larry and made sure that it was secure, and then they walked him over to his first animal skin.

After feeling it for a few moments, he announced “Bear, shot with a .308 rifle.”

The bar patrons gasped – he was right.  He was handed a glass of beer, which he downed straight away.

They brought him another skin, one that someone had in their car trunk.

He took a bit longer this time and then said, “Elk, shot with a 7mm mag rifle.”

He was right again.

Through the night, he proved his skills again and again, every time against a round of drinks.

Finally he staggered home, drunk out of his mind, and went to sleep.

The next morning he got up and saw in the mirror that he had one hell of a shiner.

He said to his wife, “I know I was drunk last night, but not drunk enough to get in a fight and not remember it.  Where did I get this black eye?”

His wife angrily replied, “I gave it to you.  You got into bed and put your hand down my panties.  Then you fiddled around a bit and loudly announced,