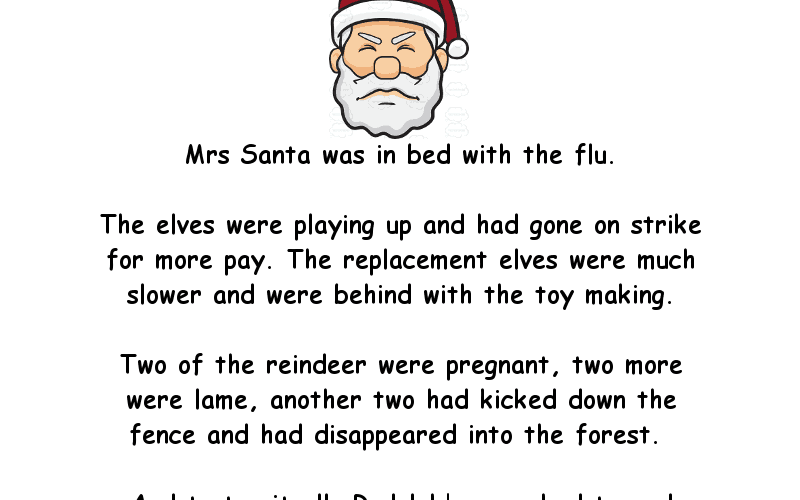 Santa Was Having A Bad Day!

Mrs Santa was in bed with the flu.  The elves were playing up and had gone on strike for more pay.  The replacement elves were much slower and were behind with the toy making.

Two of the reindeer were pregnant, two more were lame, another two had kicked down the fence and had disappeared into the forest.  And to top it all, Rudolph’s nose had turned black!

Then Santa discovered that one of the runners on his sleigh had come off and the bells were missing.

What I need, thought Santa, is a good strong cup of coffee.  But when he opened the cupboard, the jar fell out and the coffee spilt all over the floor!

By now Santa was thoroughly fed up.  He went to fetch the broom to sweep up the mess, but found that the mice had chewed off all the bristles!

At that moment there was a knock on the front door.

Upon opening it, Santa was confronted by a beautiful Fairy holding a lovely Christmas tree.
“Good morning, Santa”, she trilled, “Isn’t it a perfectly gorgeous day?  I have brought you this beautiful tree, isn’t it lovely?  Where would you like me to stick it?”

…. And that is why by tradition we have a Fairy sitting on top of the Christmas tree!