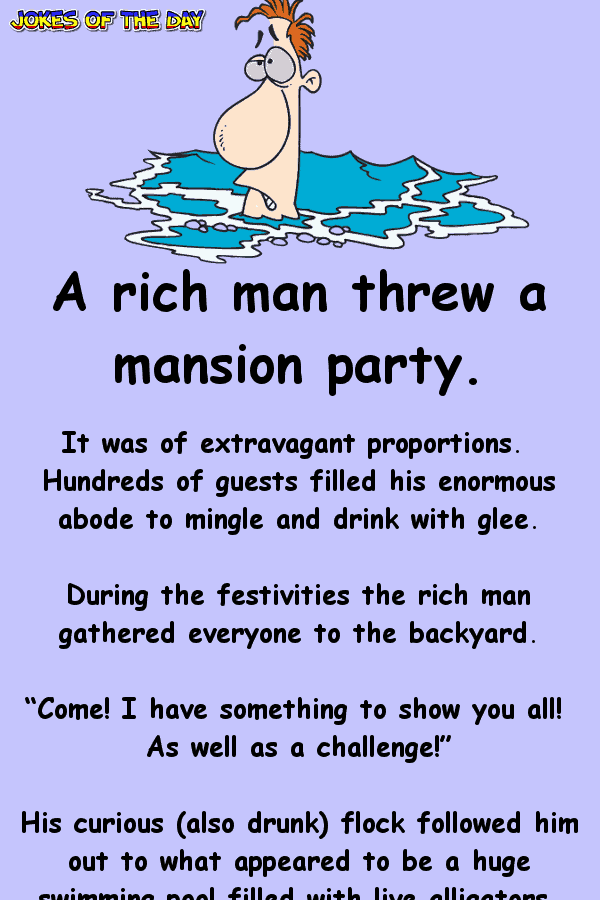 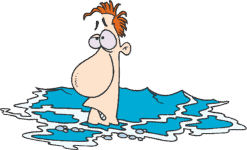 It was of extravagant proportions.  Hundreds of guests filled his enormous abode to mingle and drink with glee.

During the festivities the rich man gathered everyone to the backyard.

“Come! I have something to show you all!  As well as a challenge!”

His curious (also drunk) flock followed him out to what appeared to be a huge swimming pool filled with live alligators.

“What is the meaning of this?!” Exclaimed one man

The rich man replied. “I have so much wealth that I do not know what to do with it.  I have more money than one man could ever hope to spend.  Alas I am bored!”

“This is my 80 foot pool and it holds one hundred hungry alligators!” He proudly proclaimed.  “I am prepared to pay a cash prize of $10,000,000 to anyone who can swim from one side to the other without being harmed!”

His audience fell silent.  No one was crazy (or drunk enough) to attempt such a feat.

“You’re a madman!” One guest bellowed out.  “A fools errand to be sure!” Another one shouted.

“Yes, yes, I suppose you’re right.” The rich man nodded.  “I did not expect anyone to be willing to throw away their life for mere dollars.  Back inside I suppose”.

Just as the rich man and all of his guests are heading back inside the mansion, he hears a loud SPLASH.

“Out of my way!” He yelled, as he pushed his way through the crowd back to the pool.

Much to his surprise and disbelief, he sees a young man swimming for his life across the gator infested pool!  The young man narrowly makes it to the other side safe and unharmed, climbs out of the water, doubles over hands on knees and begins to breath heavily.

The rich man rushes over to him.  “Are you insane?! He shrieks.  “You could have died!  Why would you even attempt such a stunt?!  I mean the money is no problem, I’ll deliver it to you at once however, I must know what made you go for it?  I’ve never seen anyone swim that fast in my life!”

The young man, still catching his breath, picks himself up to stand straight, wrings his soaked shirt, and slicks his hair back, looks the rich man dead in his face and angrily says…

“My Wife f*cking pushed me!”