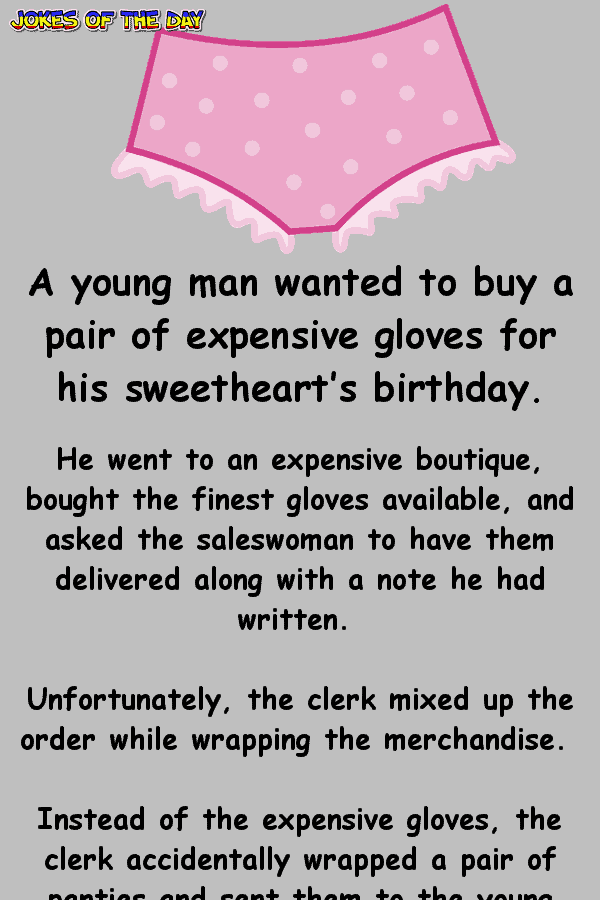 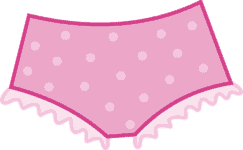 A young man wanted to buy a pair of expensive gloves for his sweetheart’s birthday.

He went to an expensive boutique, bought the finest gloves available, and asked the saleswoman to have them delivered along with a note he had written.

Unfortunately, the clerk mixed up the order while wrapping the merchandise. Instead of the expensive gloves, the clerk accidentally wrapped a pair of panties and sent them to the young man’s sweetheart along with the following note which he had written.

Darling: I have been trying desperately to come up with a special gift for your birthday. I chose these because I noticed that you are not in the habit of wearing any when we go out in the evening.
I would have chosen the long ones with buttons, but since your sister wears the short ones which are so easy to remove, I wanted to get the same style for you.

You may be concerned that these are a delicate shade, however, the saleslady showed me a pair that she had been wearing for three weeks and they were hardly soiled. She said that there are a couple of important care considerations that I should mention to you. First, when you take them off, remember to blow in them before putting them away since they will naturally be a little damp from wearing. Second, be sure to keep them on while cleaning them so that they won’t shrink.

The saleslady made such an impression upon me that I had her try them on for me. She really looked great in them and I can just imagine how great they are going to look on you. I decided to mail these so that you would have them in time for your birthday. I really hesitated because I wanted so much to be there to watch you put them on for the first time. There is little doubt in my mind that many other hands will have touched them before I see you again. I can hardly wait to run my own hands over them or do as the French do, and gently kiss them. I hope you really like them and will wear them for me on Friday night.

P.S – The latest style is to wear them folded down with a little fur showing.