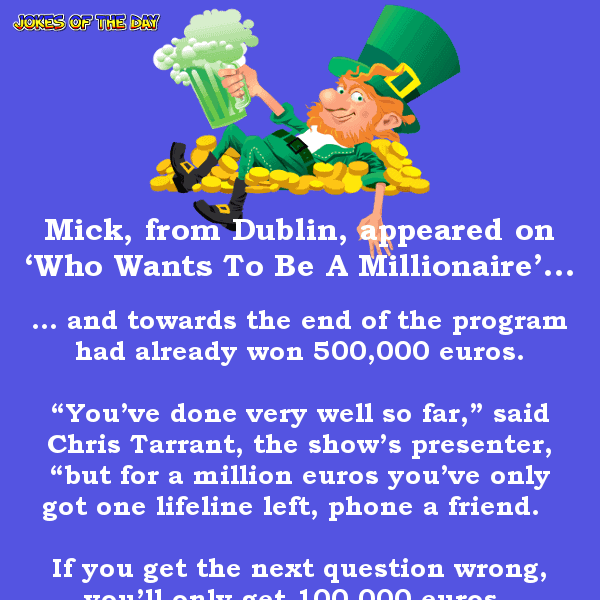 Mick, from Dublin, appeared on ‘Who Wants To Be A Millionaire’…

“You’ve done very well so far,” said Chris Tarrant, the show’s presenter, “but for a million euros you’ve only got one lifeline left, phone a friend.  If you get the next question wrong, you’ll only get 100,000 euros.  Everything is riding on this question.  Will you go for it?”

“I haven’t got a clue.” said Mick, ”So I’ll use my last lifeline and phone my friend Jessica back home in Dublin.”

“Hello, is this Jessica? I’m calling from ‘Who Wants To Be A Millionaire’.  I’m sitting here with Mick and he needs your help to win a million euros.  Are you ready?”

Mick was distraught.  Paddy wasn’t exactly known for being the sharpest tool in the shed.

The host said, “According to the rules, this counts as your call no matter who picks up.”

The host read the question and alternatives aloud.

Mick hung up the phone and told the host, “I’ll go with cuckoo as my answer.”

“Is that your final answer?” asked the host.

There was a long, long pause and then the presenter screamed, “Cuckoo is the correct answer!  Mick, you’ve won 1 million euros!”

The next night, Mick went round to Paddy’s to buy him a drink.

“Tell me, Paddy?  How in Heaven’s name did you know it was da cuckoo that doesn’t build its own nest?”

“Dat’s easy.  Because he lives in a fookin’ clock!”