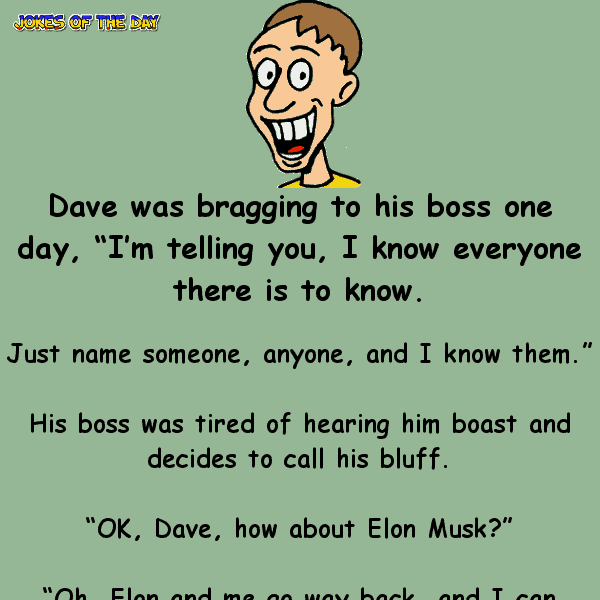 Dave was bragging to his boss one day, “I’m telling you, I know everyone there is to know.

Just name someone, anyone, and I know them.”

His boss was tired of hearing him boast and decides to call his bluff.

So Dave and his boss fly out to Florida and knock on Elon Musk’s door, and Elon shouts, “Dave! What’s happening? Great to see you! Come on in for a beer!”

Although impressed, Dave’s boss is still sceptical.  After they leave Musk’s house, he tells Dave that he thinks him knowing Elon was just lucky.

“Yup,” Dave says, “Bill and I are old buddies.  Let’s fly out to California,” and off they go.

At the Microsoft offices, Bill Gates spots Dave and motions him and his boss over, saying, “Dave, what a surprise, I was just on my way to a meeting, but come on in with your friend, let’s have a beer first and catch up.”

Well, the boss is very shaken by now but still not totally convinced.  After they leave the Microsoft offices, he expresses his doubts to Dave, who again asks him to name anyone else.

Dave and his boss are assembled with the masses at the Vatican’s St. Peter’s Square when Dave says, “This will never work.  I can’t catch the Pope’s eye among all these people.  Tell you what, I know all the guards so let me just go upstairs and I’ll come out on the balcony with the Pope.”  He disappears into the crowd, headed towards the Vatican.

Sure enough, half an hour later Dave emerges with the Pope on the balcony, but by the time Dave returns, he finds that his boss has had a heart attack and is surrounded by paramedics.

Making his way to his boss’ side, Dave asks him, “What happened?”

His boss looks up and says, “It was the final straw… you and the Pope came out on to the balcony and the man next to me said, ‘Who the hell is that on the balcony with Dave?’”