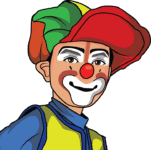 An Oklahoma State Trooper pulls over a circus clown for speeding.

The trooper asks the clown, “Why were you driving so fast?”

The clown says, “I’m headed to Tulsa for a circus show and I don’t want to be late.”

The trooper asks the clown, “What do you do in the show?”

“I’m a juggler” says the clown.

“Alright”, says the trooper, “If you juggle for me here, I won’t give you a ticket.”

The clown says, “I don’t have my equipment, it got sent ahead of me.”

The trooper says excitedly, “I’ve got some flares in the back of my car.”

As the clown begins juggling the flares on the side of the road, a good-old boy, drunk off his ass, pulls in behind the trooper to witness the spectacle.

After watching for a few minutes, the drunk man then climbs into the back seat of the squad car.

The trooper, having never seen a man arrest himself before, walks over to the man and asks, “What are you doin, son?”

The drunk man says, “You may as well take me to jail now, ’cause I ain’t gonna pass that test.”

Back to Top
Close

Send this to a friend