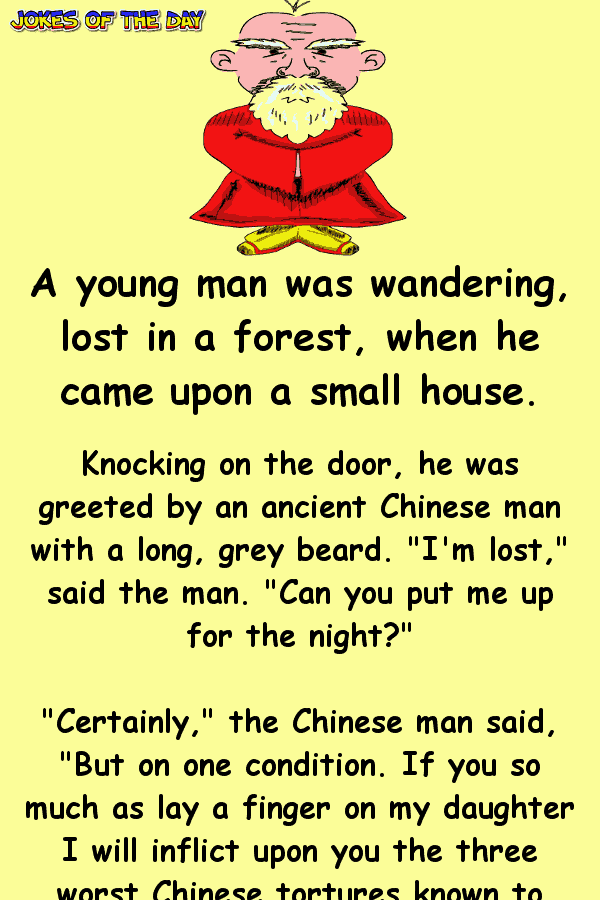 A young man was wandering, lost in a forest, when he came upon a small house.

Knocking on the door, he was greeted by an ancient Chinese man with a long, grey beard. “I’m lost,” said the man. “Can you put me up for the night?”

“Certainly,” the Chinese man said, “But on one condition.  If you so much as lay a finger on my daughter I will inflict upon you the three worst Chinese tortures known to man.”

“OK” said the man, thinking that the daughter must be pretty old as well, and entered the house.

Before dinner the daughter came down the stairs.  She was young, beautiful and had a fantastic figure.  She was obviously attracted to the young man as she couldn’t keep her eyes off him during the meal.

Remembering the old man’s warning, he ignored her and went up to bed alone.
But during the night he could bear it no longer and sneaked into her room for a night of passion.  He was careful to keep everything quiet so the old man wouldn’t hear, and near dawn, he crept back to his room, exhausted but happy.

“Well, that’s pretty crappy,” he thought. “If that’s the best the old man can do, then I don’t have much to worry about.”  He picked the boulder up, walked over to the window, and threw the boulder out.

As he did so, he noticed another note on it that read, “Chinese Torture 2: Rock tied to left testicle.”  In a panic he glanced down and saw the line that was already getting close to taut.  Figuring that a few broken bones was better than castration, he jumped out of the window after the boulder.

As he plummeted downward he saw a large sign on the ground that read, “Chinese Torture 3: Right testicle tied to bedpost.”