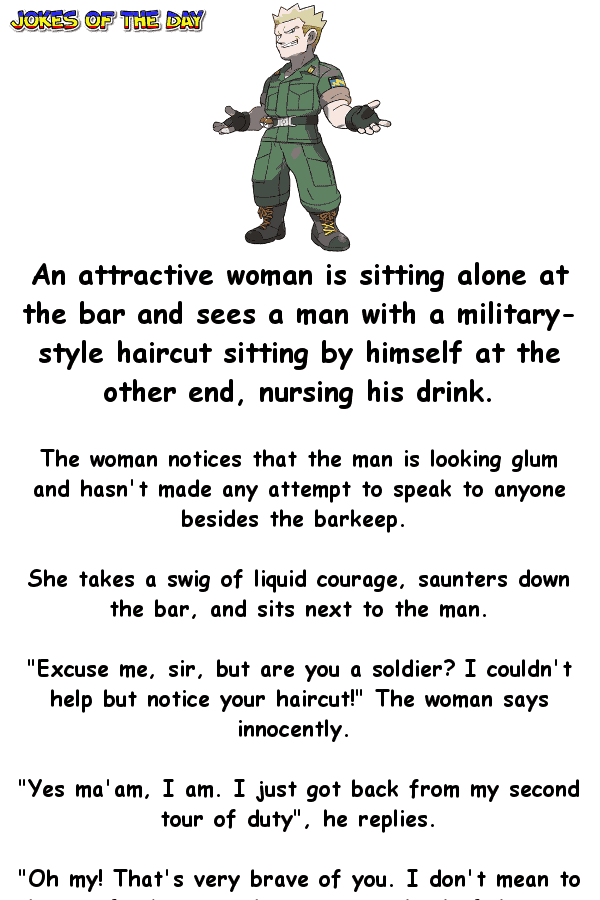 An attractive woman is sitting alone at the bar and sees a man with a military-style haircut sitting by himself at the other end, nursing his drink.

The woman notices that the man is looking glum and hasn’t made any attempt to speak to anyone besides the barkeep. She takes a swig of liquid courage, saunters down the bar, and sits next to the man.

“Excuse me, sir, but are you a soldier? I couldn’t help but notice your haircut!” The woman says innocently. “Yes ma’am, I am. I just got back from my second tour of duty”, he replies.

“Oh my! That’s very brave of you. I don’t mean to be too forthcoming, but you seem kind of down in the dumps. Is everything alright?” The woman purrs.

The man finishes his drink in a single quaff, takes a long, slow breath and relates to the woman that his longtime girlfriend left him on his first deployment, so he re-upped and went back in for a second tour.  The second tour was gruelling and gruesome and the man had lost several close friends in combat. He then explains that this was once his favorite bar but now it only brings back bad memories.

“Goodness!” The woman cried. “You must be awfully lonely these days!”

The man nods and quietly says “Yes ma’am. All I seem to know is how to be a soldier.”

The woman, smitten by the handsome soldier, continues to sit beside him and they keep shooting the breeze.  Between the booze, good conversation, and the obvious attraction, the pair realize the sexual tension is thick enough to cut with a knife.

“Forgive me for being brash, but when was the last time you had sex?” The woman coos.

The woman is shocked and immediately whispers in his ear that she is going to change that.

They catch a ride from the bar to her house, sucking face the whole way there.

The two burst inside her home and immediately get hot and heavy.  They make love everywhere and in all kinds of positions. After some of the most vigorous and fulfilling sex of their lives, the woman gasps, “That was incredible! I can’t believe you haven’t had sex since 2015!”

The man turns to her with a puzzled look and says “It was that noticeable? It’s only 0100 now!”