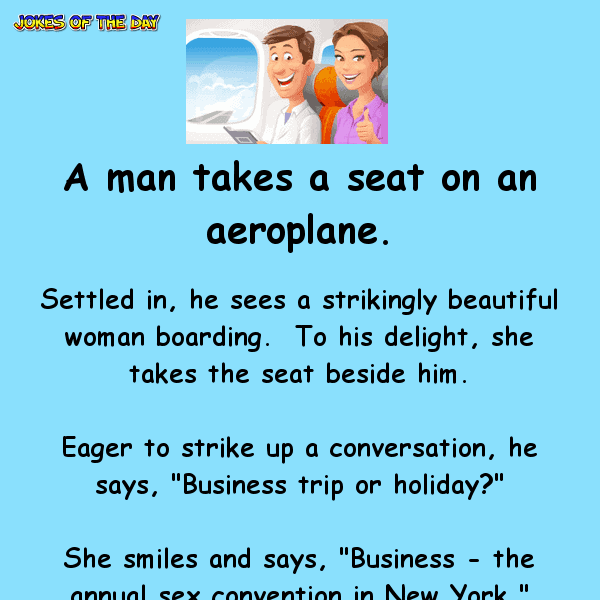 A man takes a seat on an aeroplane.

Settled in, he sees a strikingly beautiful woman boarding.  To his delight, she takes the seat beside him.

Eager to strike up a conversation, he says, “Business trip or holiday?”

She smiles and says, “Business – the annual sex convention in New York.”

Struggling to maintain his composure, he asks, “What’s your role at the convention then?”

“Lecturer,” she responds. “I use my experience to debunk some of the popular myths about sexuality.”

“Well,” the woman explains, “one popular myth is that African men are the best endowed, when, in fact, it’s the Native American Indians.  Another misconception is that Frenchmen are the world’s best lovers, when in fact men of Jewish descent are the best in bed.  We have, however, found that the best overall lovers are the rednecks from southern USA.”

Suddenly, the woman becomes a little uncomfortable and blushes. “I’m really sorry,” she says, “I shouldn’t really be discussing this with you.  I don’t even know your name.”

“Tonto,” the man says. “Tonto Goldstein.  But my friends call me Bubba.”