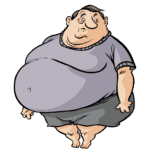 A man and his wife go to a spiritual healer and they ask him to cure their illnesses.

The healer says he will, but they must put their hand on the part of their body they want healed.

The wife proceeds to put her hand on her throat, as she has had a sore throat which won’t go away.

Looking at his wife, the husband then proceeds to place his hand on his crotch.

The wife looks at him, and shakes her head,

“Honey, he said he will treat our illnesses, not raise the dead.”