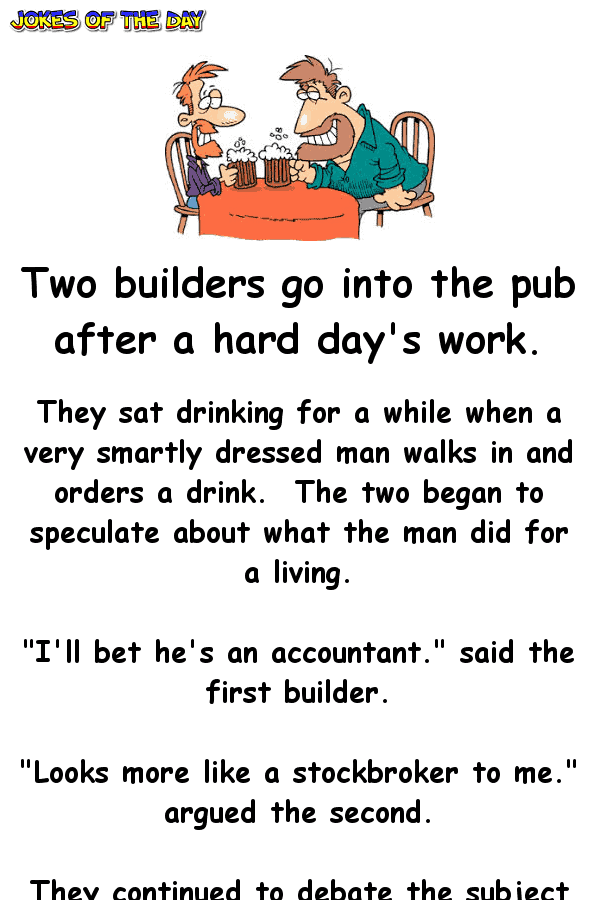 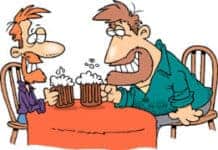 Two builders go into the pub after a hard day’s work.

They sat drinking for a while when a very smartly dressed man walks in and orders a drink.  The two began to speculate about what the man did for a living.

“Looks more like a stockbroker to me.” argued the second.

They continued to debate the subject for a good while until eventually the first builder needed to use the toilet.  On walking in, he saw the smartly dressed man standing at a urinal.

“Excuse me buddy, but me and my friend have been arguing over what a smartly dressed fella like you does for a living?” the builder said to the man.

“A what?” asked the builder.

“Let me explain” the man continued, “Do you have a goldfish at home?”

A bit puzzled, but intrigued the builder decided to play along, “Yes, I do as it happens.”

“Well then it’s logical to assume that you either keep it in a bowl or a pond. Which is it?”

“A pond” the builder replied.

“Well then it’s logical to assume that you have a large garden.”  The builder nodded his agreement.

So the man continued, “which means it’s logical to assume you have a large house.”

“I have a 6 bedroom house that I built myself.” the builder said proudly.

“Given that you have such a large house, it’s logical to assume that you are married…”

The builder nodded again, “Yes, I’m married and we have three children.”

“Then it’s logical to assume that you have a healthy sex life.”

“Well there you have it” the man explained, “That’s logical science at work.  From finding out that you have a goldfish, I’ve discovered the size of your garden, all about your house, your family and your sex life!”

The builder left, very impressed by the man’s talents.

On returning to the bar the other builder asked, “I see that smart bloke was in there, did you find out what he does?”

“A what?” the puzzled second builder asked.

“Let me explain” the first builder continued, “Do you have a goldfish at home?”

“No” replied his mate.