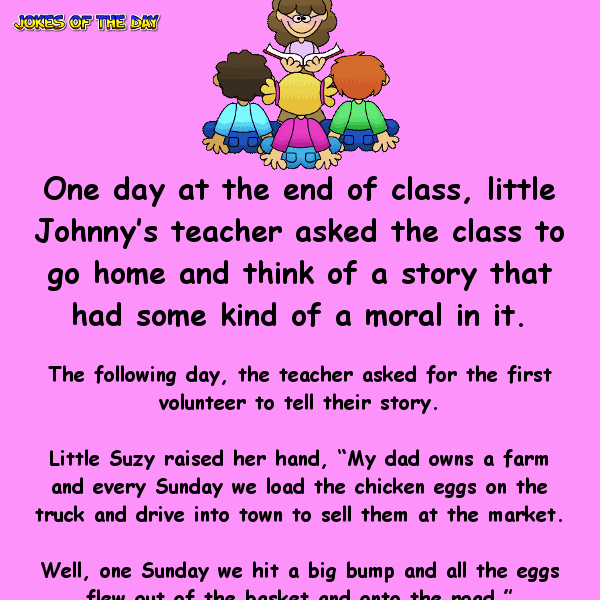 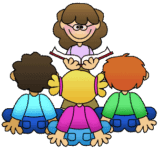 One day at the end of class, little Johnny’s teacher asked the class to go home and think of a story that had some kind of a moral in it.

The following day, the teacher asked for the first volunteer to tell their story.

Little Suzy raised her hand, “My dad owns a farm and every Sunday we load the chicken eggs on the truck and drive into town to sell them at the market.

Well, one Sunday we hit a big bump and all the eggs flew out of the basket and onto the road.”

The teacher asked for the moral of the story.

Suzy replied, “Don’t keep all your eggs in one basket.”

Little Lucy went next, “My dad owns a farm too.  Every weekend we take the chicken eggs and put them in the incubator. Last weekend only eight of the 12 eggs hatched.”

Again, the teacher asked for the moral of the story.

Lucy replied, “Don’t count your chickens before they hatch.”

Next up was little Johnny.

He said, “My gramps fought in World War 2, and his plane was shot down over enemy territory.  He jumped out before it crashed but could only take a case of beer, a machine gun and a knife.  On the way down, he drank the case of beer.”

The teacher looked stunned, but little Johnny continued, “Then gramps landed right in the middle of 100 German soldiers.

He shot 70 with his machine gun, but then he ran out of bullets!  So he pulled out his knife and killed 20 more.  Then the blade on his knife broke, so he killed the last ten with his bare hands.”

The teacher now looked more than a little shocked.

After clearing her throat, she asked what possible moral there could be to this story.