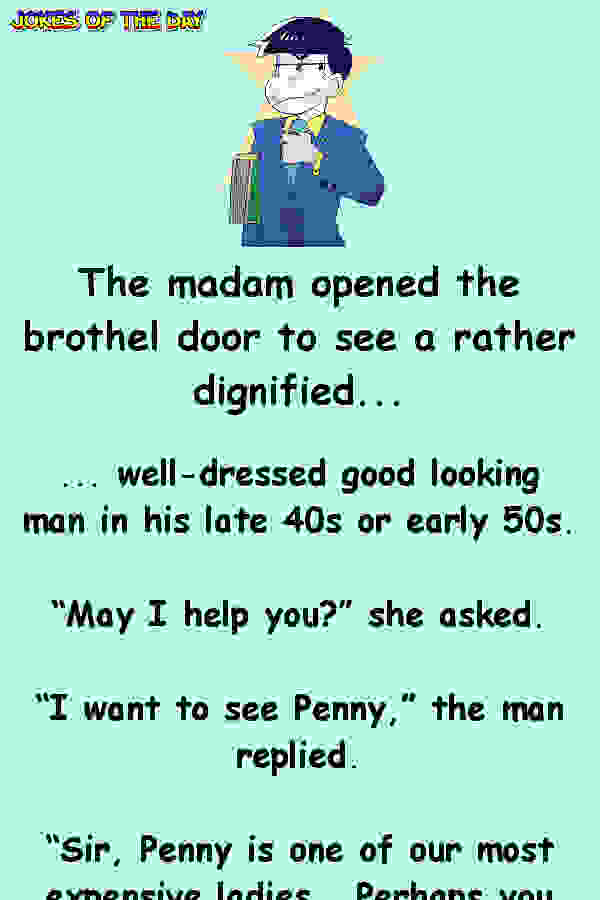 The madam opened the brothel door to see a rather dignified, well-dressed good looking man in his late 40s or early 50s.

“I want to see Penny,” the man replied.

“Sir, Penny is one of our most expensive ladies.  Perhaps you would prefer someone else?,” said the madam.

Just then, Penny appeared and announced to the man that she charged $1,000 a visit.

Without hesitation, the man pulled out ten one-hundred dollar bills, gave them to Penny, and they went upstairs.

After an hour, the man calmly left.

The next night, the same man appeared again, demanding to see Penny.

Penny explained that no-one had ever come back two nights in a row – too expensive – and there were no discounts.  The price was still $1,000.

Again the man pulled out the money, gave it to Penny and they went upstairs.

After an hour, he left.

The following night the man was there again.

Everyone was astounded that he had come for the third consecutive night, but he paid Penny and they went upstairs.

After their “session”, Penny questioned the man. “No-one has ever been with me three nights in a row.  Where are you from?” she asked.

“Really?” she said. “I have family in South Carolina.”

The moral of the story is that three things in life are certain:

3. Being screwed by a lawyer