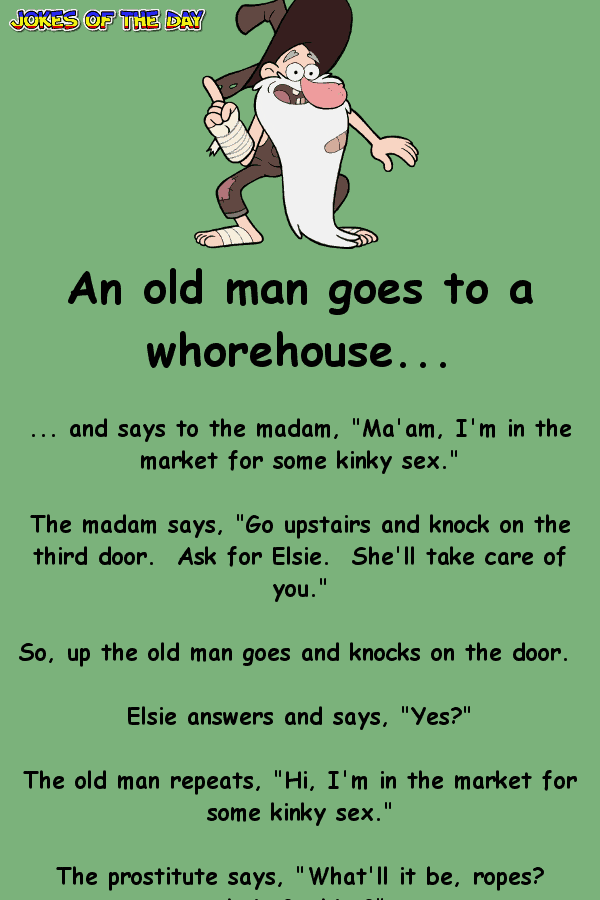 An old man goes to a whorehouse…

The madam says, “Go upstairs and knock on the third door.  Ask for Elsie.  She’ll take care of you.”

So, up the old man goes and knocks on the door.

The old man repeats, “Hi, I’m in the market for some kinky sex.”

The prostitute says, “What’ll it be, ropes? chains? whips?”

The old man replies, “I’m wondering if we could maybe draw a bath?”

They go into the bathroom and the prostitute turns on the faucet.

As the bath fills up, the old man says, “Maybe you can turn on the shower, it would be like rain falling on the lake!”

So, the prostitute obliges and turns on the shower.  The old man is in ecstasy. “Yes! Just like I remember! Ok, now, whoosh the water back and forth with your hands it will be like waves!”

So, the prostitute starts whooshing the water.  As she’s doing this, the old man says, “Yes, perfect!  Now, flush the toilet with your elbow, it’ll be like thunder!”

So, the prostitute obliges and flushes the toilet, and the old man says, “Now, as the water is filling up in the toilet, flick the light switch on and off, it’ll be like lightning!  But keep going with the waves!”

The old man is getting so excited, “Yes! Rain! Waves! Thunder! Lightning!” and the prostitute is just working everything non-stop.

After a while, the prostitute, exhausted, says, “Mister, what do you say we give this up and just have some normal sex?”

The old main exclaims, “What, in this weather?!?”