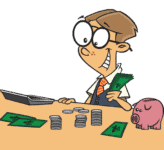 So there’s a deaf accountant who works for the mafia.

One day, the king pin mafioso is checking out the books and notices there’s a million dollars missing. He calls a meeting with the deaf accountant and a sign language translator.

“Ok, there’s a million dollars missing, where is it?” asks the king pin.

Translator says, “There’s a million dollars missing, boss wants to know where it is.”

Deaf man signs over to the translator, “What? I have no idea what he’s talking about”

Translator says to the boss, “Boss, he says he doesn’t know what you’re talking about”.

Boss says to the translator “I’m gonna ask one more time. Where is the money?”

Deaf man reiterates to the translator through sign, “Seriously, I don’t know what he’s talking about!”

Translator says to the Boss, “He says he seriously doesn’t know what you’re talking about”

The boss is now infuriated. He slams his fist down on the table, and points a gun to the accountants head. He tells the translator, “TELL THIS MOTHER F*CKER I WILL BLOW HIS BRAINS ALL OVER THIS DESK IF HE DOESN’T TELL ME WHERE THE MONEY IS RIGHT F*CKING NOW”

Translator signs to the accountant “Ok, he’s dead serious. You better tell him where the money is, or he’s going to kill you right here”

Accountant signs to the translator, “OK! OK! I’ll tell you! I hid it in a briefcase underneath my deck!”