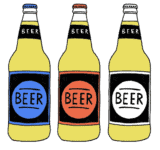 … all the brewery presidents decided it would be fun to hit a pub in London and go out for a beer.

The first sits down and says, “Hey, Señor, I would like the world’s best beer, a Corona.”

The bartender dusts off a bottle from the shelf and gives it to him.

The second says, “I’d like the best beer in the world. Give me ‘The King of Beers.’ One Budweiser please.”

The bartender gives him one.

Another guy says, “I’d like the only beer made with Rocky Mountain spring water; give me a Coors.”

The bartender gives him one.

The guy from Guinness sits down and he orders a Coke.

The bartender is a bit taken aback, but gives him what he ordered.

The other presidents look over at him and ask, “Why aren’t you drinking a Guinness?”

“Well, if you guys aren’t drinking beer, neither will I.”