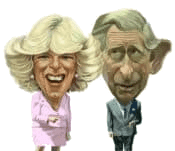 Prince Charles decided to take up walking every day.

However, his route takes him past a particular corner on which a prostitute is always standing, offering her services.

He learned to brace himself as he approached her for what was almost certain to follow.

“No, five pounds!” he’d say, from the side of his mouth, just to shut her up.

This ritual between him and the hooker became a daily occurrence.

“One hundred and fifty pounds!”

One day, Camilla decided to accompany her husband.

As the couple neared the hooker’s corner, Prince Charles realised she’d bark her £150 offer and Camilla would wonder what he’d really been doing on all his past outings.

As they neared the hooker’s corner he became even more apprehensive than usual.

Sure enough, there she stood.

He tried to avoid eye contact as she watched the pair pass.

Then, the hooker yelled; “See what you get for five pounds, you tight bastard!”