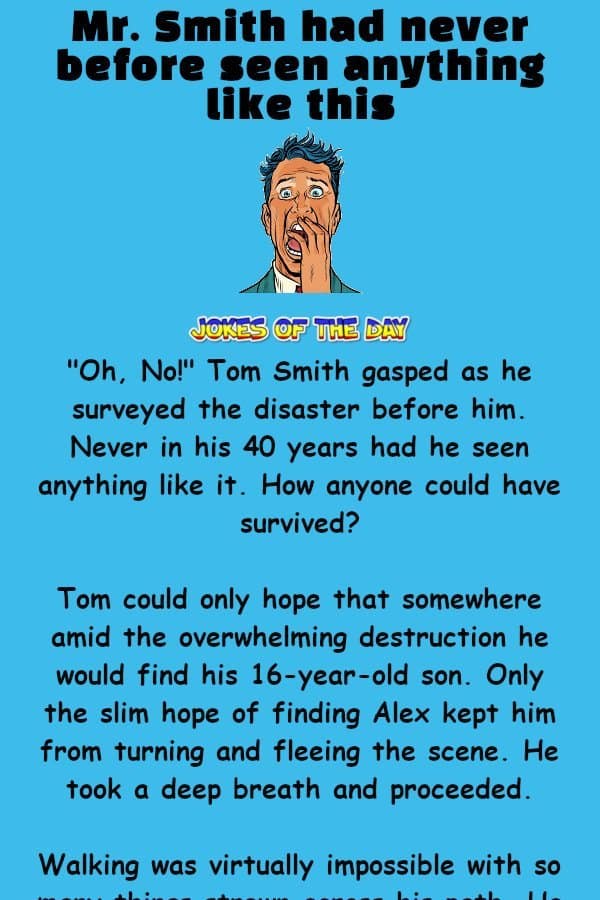 “Oh, No!” Tom Smith gasped as he surveyed the disaster before him. Never in his 40 years had he seen anything like it. How anyone could have survived?

Tom could only hope that somewhere amid the overwhelming destruction he would find his 16-year-old son. Only the slim hope of finding Alex kept him from turning and fleeing the scene. He took a deep breath and proceeded.

Walking was virtually impossible with so many things strewn across his path. He moved ahead slowly.

“Alex! Alex!” he whispered to himself. He tripped and almost fell several times. He heard someone, or something, move. At least he thought he did. Perhaps, he was just hoping he did. He shook his head and felt his gut tighten.

He couldn’t understand how this could have happened. There was some light but not enough to see very much. Something cold and wet brushed against his hand. He jerked it away.

In desperation, he took another step then cried out, “Alex!”

From a nearby pile of unidentified material, he heard his son. “Yes, Dad,” he said, in a voice so weak it could hardly be heard.

“It’s time to get up and get ready for school,” Tom sighed, “And, for goodness sake, clean up this room!”