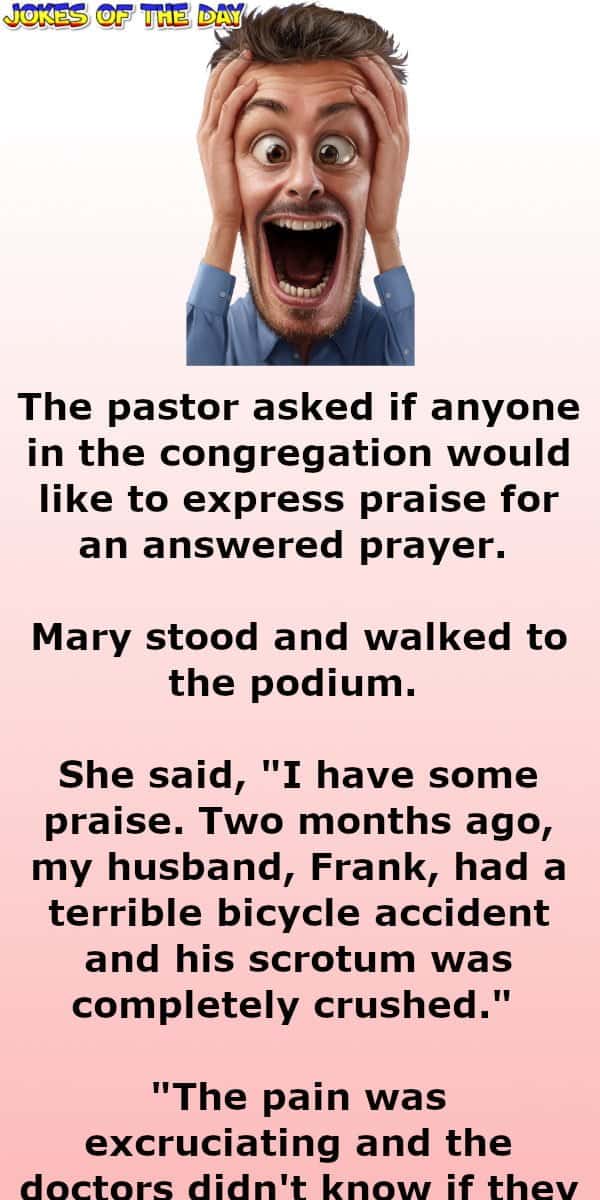 The pastor asked if anyone in the congregation would like to express praise for an answered prayer.

Mary stood and walked to the podium.

She said, “I have some praise. Two months ago, my husband, Frank, had a terrible bicycle accident and his scrotum was completely crushed.”

“The pain was excruciating and the doctors didn’t know if they could help him.”

You could hear a rustling sound as the men in the congregation crossed their legs, imagining the pain that poor Frank must have experienced.

“Frank was unable to hold me or the children,” she went on, “And every move caused him terrible pain.”

“We prayed as the doctors performed a delicate operation, and it turned out they were able to piece together the crushed remnants of Frank’s scrotum, and wrap wire around it to hold it in place with metal staples.”

Again, the men in the congregation cringed and squirmed uncomfortably as they imagined the horrible surgery performed on Frank.

“Now,” she announced in a quivering voice, “Thank the Lord, Frank is out of the hospital and the doctors say that with time, his scrotum should recover completely.”

All the men sighed with unified relief.

The pastor rose and tentatively asked if anyone else had something to say.

A man stood up and walked slowly to the podium.

The entire congregation held its breath.

“I just want to tell my wife that the word is ‘sternum.'”