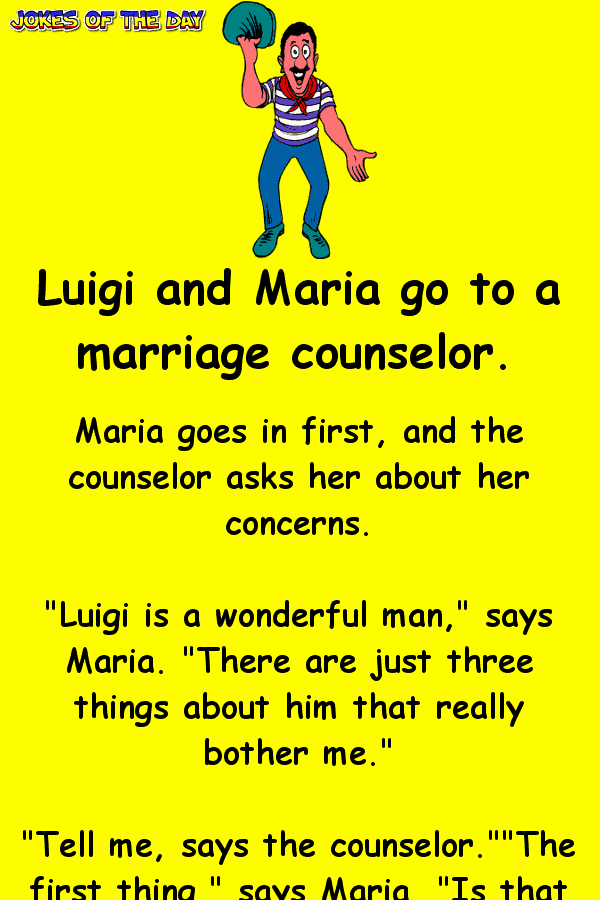 Luigi and Maria go to a marriage counselor.

Maria goes in first, and the counselor asks her about her concerns.

“Luigi is a wonderful man,” says Maria. “There are just three things about him that really bother me.”

“Tell me, says the counselor.”

“The first thing,” says Maria, “Is that he’s a workaholic.  He works so much, he has very little time left for me and the kids.”

“The second thing…” says Maria, “And I know this is petty, but he’s always picking his nose in public. It’s embarrassing.”

“And what’s the third thing?” asks the counselor.

“Well,” says Maria, “This is a little personal, but he never lets me get on top when we’re having sex.”

So the counselor sends Maria out, and asks Luigi to come in.

“How is everything with your marriage?” asks the counselor.

“Well, Maria had a few things she wanted me to discuss with you.

First, she says you are a workaholic.  Second, she says you pick your nose quite a bit in public. Third… and this is a little delicate, she says you never let her get on top when you are having sex.”

And Luigi says, “When I comma to this country, my father tella me three things. Three things, he tella me, to make it big in America.