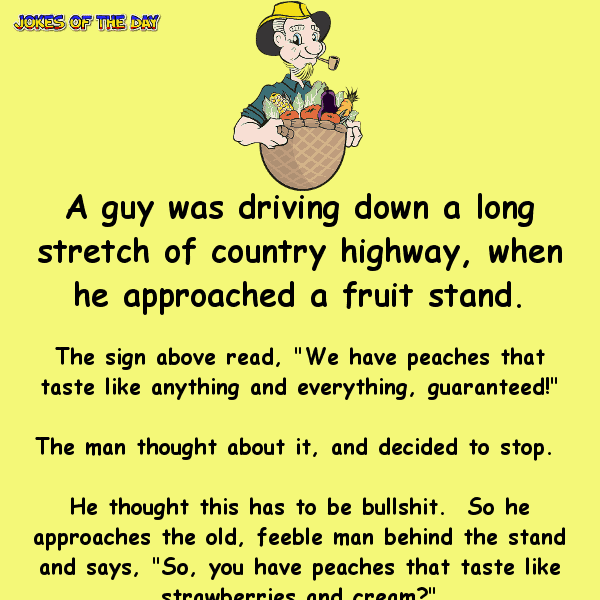 A guy was driving down a long stretch of country highway, when he approached a fruit stand.

The man thought about it, and decided to stop.

He thought this has to be bullshit.  So he approaches the old, feeble man behind the stand and says, “So, you have peaches that taste like strawberries and cream?”

The old man hands him a peach and the driver takes a bite.  “Mmmmmm, tastes like strawberries,” he says.

“Turn it around,” the old man says.

The driver turns it around, bites into it, and the other side tastes like cream.

The man thinks for a second, and says, “How ’bout steak and baked potato?”

The old man behind the stand looks for a second, and then comes up with a new peach.  He hands it to the weary traveller.

He bites into it. “Tastes like steak,” he says.

“Turn it around,” the old man says. “Wow, POTATO!”  The traveller thinks really hard for about 2 minutes before he finally blurts out, “O.K. old man, I bet you don’t have one that tastes like pussy!”

The old man produces another peach very quickly and hands it to the driver.

He takes a big bite out of it, chews a couple of times, spits it out, and says, “Man, this tastes like SHIT!!”