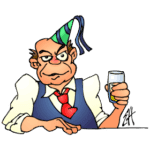 While reading an article about fathers and sons drinking together…

… I realized, after all this time, that I had never taken my son out for a drink.

So off we went to our local bar, which was only two blocks from the house.

Then I got him a Killian’s.  He didn’t like that either, so I drank it.

Losing hope, I ordered him a Harp Lager.  Nope, he didn’t like that neither.  I drank it.

I thought maybe he’d like whiskey better than beer so we tried a Jameson’s.  Nope, no cigar!

In desperation, I had him try that 25 year old Glenfiddich.  The bar’s finest scotch.

He wouldn’t even smell it.  What could I do but drink it!

By the time I realized he just didn’t like to drink, I was so shit-faced I could hardly push his stroller back home!