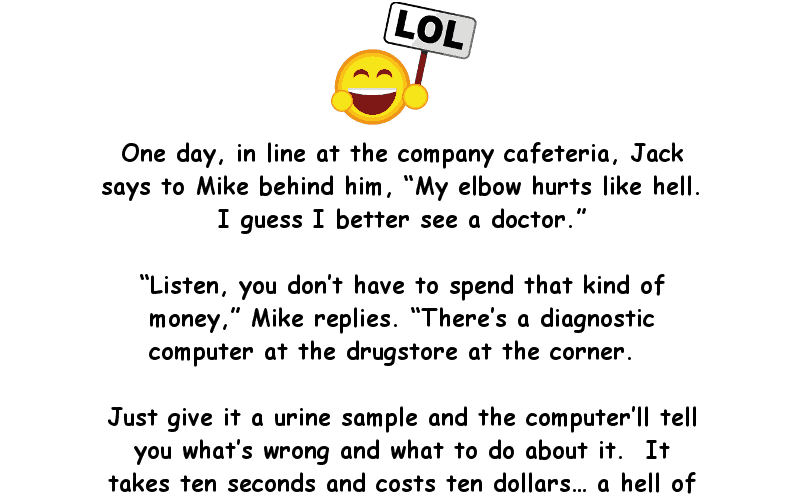 One day, in line at the company cafeteria, Jack says to Mike behind him, “My elbow hurts like hell. I guess I better see a doctor.”

“Listen, you don’t have to spend that kind of money,” Mike replies. “There’s a diagnostic computer at the drugstore at the corner.  Just give it a urine sample and the computer’ll tell you what’s wrong and what to do about it.  It takes ten seconds and costs ten dollars… a hell of a lot cheaper than a doctor.”

So Jack deposits a urine sample in a small jar and takes it to the drugstore.  He deposits ten dollars, and the computer lights up and asks for the urine sample.

He pours the sample into the slot and waits.  Ten seconds later, the computer ejects a printout: You have tennis elbow.  Soak your arm in warm water and avoid heavy activity.  It will improve in two weeks.

That evening while thinking how amazing this new technology was, Jack began wondering if the computer could be fooled. He mixed some tap water, a stool sample from his dog, urine samples from his wife and daughter, and m*st*rb*ted into the mixture for good measure.

Jack hurries back to the drugstore, eager to check the results. He deposits ten dollars, pours in his concoction, and awaits the results.

The computer prints the following:

1. Your tap water is too hard. Get a water softener.
2. Your dog has ringworm. Bathe him with anti-fungal shampoo.
3. Your daughter has a cocaine habit. Get her into rehab.
4. Your wife is pregnant…twin girls. They aren’t yours. Get a lawyer.
5. If you don’t stop playing with yourself, your elbow will never get better.