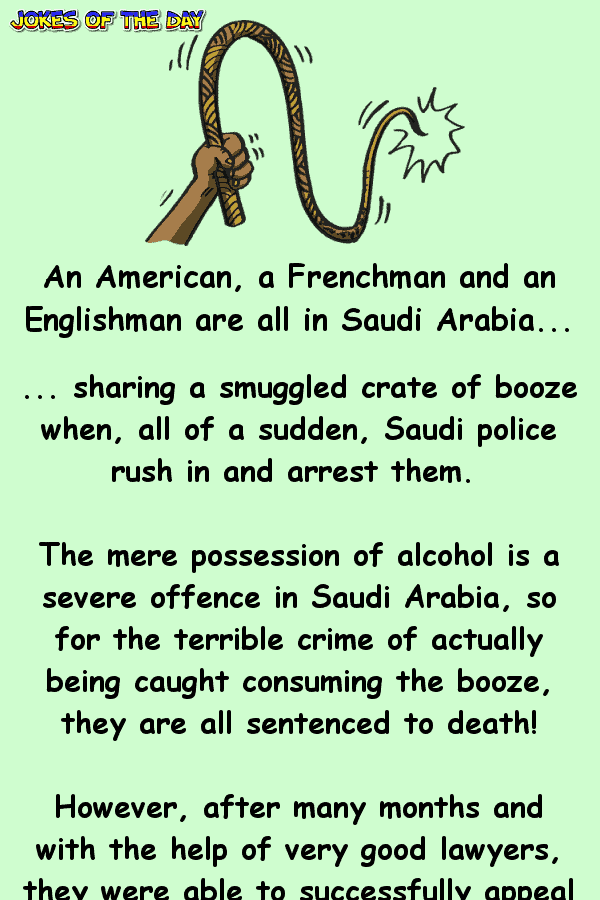 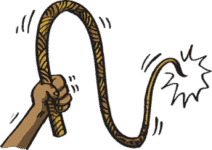 An American, a Frenchman and an Englishman are all in Saudi Arabia…

… sharing a smuggled crate of booze, when, all of a sudden, Saudi police rush in and arrest them.

The mere possession of alcohol is a severe offence in Saudi Arabia, so for the terrible crime of actually being caught consuming the booze, they are all sentenced to death!

However, after many months and with the help of very good lawyers, they were able to successfully appeal their sentences down to life imprisonment.

By a stroke of luck, it was a Saudi national holiday the day their trial finished, and the extremely benevolent Sheikh decided they could be released after receiving just 20 lashes each of the whip.

As they were preparing for their punishment, the Sheikh announced: “It’s my first wife’s birthday today, and she has asked me to allow each of you one wish before your whipping.

The Englishman was first in line, he thought for a while and then said: “Please tie a pillow to my back.”

This was done, but the pillow only lasted 10 lashes before the whip went through.  When the punishment was done the Englishman had to be carried away bleeding and crying with pain.

The Frenchman was next up.  After watching the Englishman in horror, he said smugly: “Please fix two pillows to my back.”

The two pillows absorbed all the lashings, and the Frenchman walked away unhurt and sneering at the silly Englishman.

The American was the last one up, but before he could say anything, the Sheikh turned to him and said: “You are from a most beautiful part of the world and your women are the finest in all the lands.  For this, you may have two wishes!”

“Thank you, your Most Royal and Merciful highness,” the American replied. “In recognition of your kindness, my first wish is that you give me not 20, but 100 lashes.”

“Not only are you an honorable, handsome and powerful man, you are also very brave,” the Sheikh said with an admiring look on his face.  “If 100 lashes is what you desire, then so be it.

And your second wish, what is it to be?” the Sheikh asked.

The American smiled and said, “Tie the Frenchman to my back.”