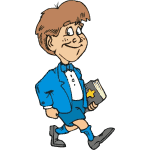 A young man was inspired to help out with his church’s fundraiser.

He asked the preacher if he could participate in the door-to-door selling of bibles.

The preacher agreed, but knowing the young man had a bad stutter, only gave him 3 bibles to sell.

The following day the young man returned asking for more.

The preacher gave him another 5 bibles.

The following day the preacher gave him another 10.

By the end of the week, the young man broke the church’s all time record for the highest number of bible sales in one week.

The preacher believed that divine intervention had occurred. He was dumbfounded and had to know the young man’s secret.

So the preacher asked the young man how he was able to sell so many bibles in such a short amount of time.

The young man smiled and said,

“I asked tha tha them if the the they wanted to baa baa buy a bible, or have mahh mahh me read it to tha tha them.”