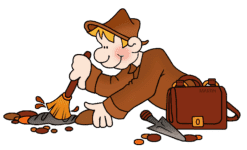 A team of archaeologists were working in Jerusalem when they found a slab of rock with five figures carved on it.

In order the figures were:

After months of studying the rock and figures on it, the leader took the rock and went on a lecture tour.  He said the carvings were several thousands of years old but even so they revealed a lot about the people of that time.

The woman being placed first in the line of figures indicated that women were held in very high esteem.  It was most likely a family oriented culture.

The donkey indicated they had domesticated animals.  They probably used the donkey to till the fields.

The shovel shows they were highly intelligent as they knew how to make tools.

The fish shows they knew how to augment the crops they raised by also reaping from the sea.

The Star of David of course indicates they were a very religious group of people.

A little old man in the front row finally got the attention of the speaker.

When acknowledged he said, “I’m sorry to harm your conclusions, but you were reading it left to right.  In Hebrew we read from right to left.  That way it reads:

“Holy mackerel dig the ass on that woman!”