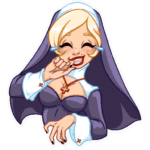 A priest and a nun are on their way back from the seminary when their car breaks down.

The garage doesn’t open until morning so they have to spend the night in a B&B.  It only has one room available.

The priest says: “Sister, I don’t think the Lord would object if we spend the night sharing this one room.  I’ll sleep on the sofa and you have the bed.”

“I think that would be fine,” agrees the nun.

They prepare for bed, say some prayers and settle down to sleep.

“OK,” says the priest, “I’ll get a blanket from the cupboard.”

The priest says: “Don’t worry, I’ll get up and fetch you another blanket.”

Another ten minutes pass, then the nun murmurs in a soft and sultry voice: “Father I’m still very cold. I don’t think the Lord would mind if we acted as man and wife just for a night.”

“You’re right,” says the priest. “Get your own bloomin’ blankets you annoying woman!”