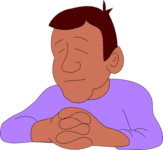 A man is praying in church.

He looks up to heaven and says “God, could you answer a question for me?”

“God, what is a million years to you?”

“Hmm,” says the man. “I guess I understand. So what is a million dollars to you then?”

“Hmm,” says the man. He goes back to praying, but after a little while he looks up again.