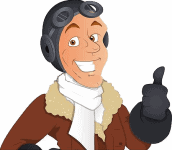 A WWII pilot is reminiscing before school children about his days in the air force.

“In 1942,” he says, “The situation was really tough. The Germans had a very strong air force. I remember,”

He continues, “One day I was protecting the bombers and suddenly, out of the clouds, these fokkers appeared.”

(At this point, several of the children giggle.)

“I looked up, and right above me was one of them. I aimed at him and shot him down. They were swarming. I immediately realized that there was another fokker behind me.”

At this instant the girls in the auditorium start to giggle and boys start to laugh.

The teacher stands up and says, “I think I should point out that ‘Fokker’ was the name of the German-Dutch aircraft company”

“But these fokkers were flying Messerschmitts.”